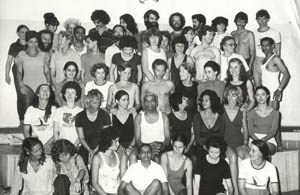 The Yoga Studio began as the ‘brain child’ of Dr. Lakshyan Schanzer. Officially it was established in Worcester during the summer of 1979. Un-officially the concept began in 1971-2 while Lakshyan had been living, working full time, and teaching in New York City in the ashram environment established by Swami Satchidananda at The Integral Yoga Institute (IYI). As his teaching work expanded, Lakshyan began teaching in many non-ashram settings. It was also during this time of deepening practice that the link between psychological and spiritual goals became increasingly clear. Lakshyan began his formal training and study of psychotherapy during this period. Over the years of intensive and regular practice he saw that yoga would benefit every level of being human: body, mind, spirit, emotions, relationships, and work. 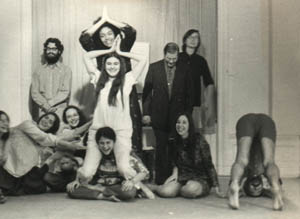 At that time, however, he was quite alone in thinking that yoga belonged outside of ashram environments. Perhaps some of this style of having a slightly different stance is evident in the photo on the left (1971) with his IYI community of friends, where Lakshyan is in the lower right corner beginning a headstand.

One of Lakshyan’s dreams was to see yoga offered in every neighborhood in the city. He was not alone in his vision. Today, we are in the new millennium, and this dream is practically a reality in New York and in many major cities all over the world.

June 21, 2007 ‘Yoga at the Crossroads’ article in NY Times: Yoga in Times Square 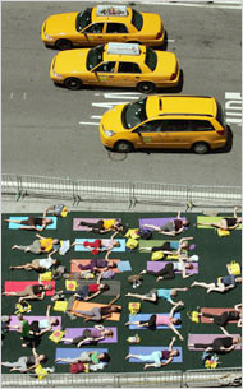 In 1977 the concept of yoga for everyone was expanded while living in Worcester, Massachusetts. Lakshyan developed programs for the elderly, for special needs populations, and the mentally retarded. Seeking more guidance and training, Lakshyan planned a study trip in India. He contacted BKS Iyengar who invited him to take the teachers training in Pune in December of 1978. (See group photo above: 4th row up and 4th from the left.)

The training with BKS Iyengar satisfied his interest in precision of technique, for a deeper understanding of the goals, Lakshyan was also guided to find Nisargadatta Maharaj (left side -below- in white). Nisargadatta Maharaj (https://luthar.com) was a fully enlightened Jnana Yogi and a rare event in the 20th century. Lakshyan attended daily satsangs with Maharaj for only about a month (Lakshyan below in yellow), but (as with many other people) the effects have been lasting. Because of Nisargadatta, Lakshyan learned that the goal of yoga is not to improve, or gain any particular condition. Rather, the goal is more of ‘undoing’, of a return to a prior and given reality, to an innately healthy sense of being with oneself and in the world.

No change can be made in you. No instruction whatsoever can be given to you. You were perfect even before you came here. And you will be returning absolutely perfect, without even a dent on you. -Maharaj

Upon return to the USA there was no longer any doubt that the world outside of ashram life needed yoga! In 1979 The Yoga Studio was opened in downtown Worcester. (Below left: Lakshyan taking a break with students of the Worcester studio. Right: practicing yoganidra in the Worcester studio.) 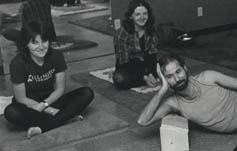 While completing his doctorate in clinical psychology (MSPP, Boston) The Yoga Studio moved to the Providence area in 1985. Providence has continued as the base location with the many programs taught around the USA and abroad. The current office/studio location is: 935 Park Ave, Suite 203, Cranston, RI 02910 (Phone: 401.369.8115).

During the years Lakshyan’s yoga curriculum and teaching has continued to unfold with greater integration of the meditative state of mindfulness and the wisdom of the body. Lakshyan’s method is reflected not only in his yoga and meditation classes, but in his psychotherapy practice, as well. After giving many trainings and workshops on the integration of the meditative state in psychotherapy, Lakshyan has produced a systematic method of BodyMind Yoga and BodyMind Psychotherapy. His approach is especially reflected in the ‘Yoga Psychology’ (5 Secrets of Healing) and ‘Heal Thy Self’ (Principles of Self Therapy) courses – which are open to students of all levels. Another way to learn about his approach is through modules within professional training programs for yoga teachers and therapists. Lakshyan is frequently invited to teach about the bodymind connection in these programs.

In the 1980′s the logo name: ‘BodyMind’ was added to the business title (‘The Yoga Studio’) as an umbrella term reflecting the larger vision of bodymind healing that is the base of Lakshyan’s work. Later, to further distinguish and authenticate his evolving method, Lakshyan simply put his name into the business title. Thus, psychotherapy (counseling), yoga and meditation classes, as well programs for interested professionals continue just as always, with Lakshyan’s BodyMind approach.

The integration of Brazilian Portuguese in his work began in 1999, when Lakshyan was invited to teach in Brazil. While still maintaining his teaching and psychotherapy practice in Rhode Island, Lakshyan learned Portuguese well enough to give yoga classes, psychotherapy session, and retreats there. 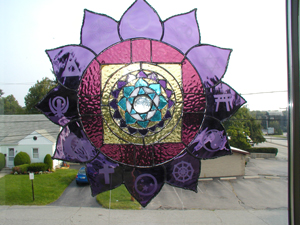 More recent years have also been productive. Lakshyan has taken time for further study and reflection on the essential elements of mental, emotional, and physical healing and how they appear across cultures and times. He realized that his method had developed sufficiently to serve people regardless of cultural background and language. Hence the more recent programs: ‘Yoga Psychology’ ( 5 Secrets of Healing) and ‘Heal Thyself’ (Self Therapy).

Please note that if you need a consultation or would like to set up a program in your area, you can reach Lakshyan by phoning (401) 369-8115 (USA). If you want to speak to him directly and have Skype or AIM you can contact him from anywhere in the world. Lakshyan accepts most health insurances.